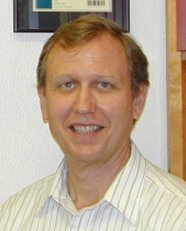 Our research uses 3-D electron microscopy (EM) to study structure and function at the resolution of molecules and supramolecular assembly within cells. This aspect of EM includes techniques such as electron crystallography, electron tomography, helical and “single particle” 3-D image reconstruction. Since we specialize in EM, we also spend considerable effort in method development particularly as it pertains to electron tomography (ET). Present efforts at method develop­ment are aimed at algorithms to improve the molecular images that we can obtain by ET.  We moved from an emphasis on electron crystallography of 2-D arrays to ET to improve our 3-D images obtained from fast frozen, active insect flight muscle (IFM). To study actively contracting IFM, we needed images of individual cross-bridges and that is something that cannot be obtained by any of the other 3DEM techniques. In order to improve signal-to-noise ratio in these 3-D images but still maintaining the ability to distinguish different structures within the muscle lattice, we adapted methods for classifying images that were developed for single particle 3-D reconstruction in order to identify and group self-similar 3-D structures for subsequent averaging. These methods are enabling us to for the first time study the conformations of tension generating cross-bridges in situ.

Our work on rigor IFM revealed at least two different cross-bridge conformations within 2-headed myosin cross-bridges, one of which has a lever arm angle near 90° suggestive of a tension generating conformation. Our reconstructions of rigor muscle also showed a mixture of single headed and double headed cross-bridges. Recently, by swelling the muscle fibers in rigor, we have been able for the first time to see and determine the amount of S2 that is free of the filament backbone and that the can modulate the ability of myosin heads to search for actin. We also found out that the origins of rigor cross-bridges are not as predicted by current models of myosin head action which are based on X-ray crystallography.

The culmination of this work is its application to time resolved studies of contracting muscle.  This effort applies the combination of 3-D tomography, X-ray diffraction, muscle mechanics and fast freezing to trap force-bearing cross-bridges in situ.  These experiments allow us to build atomic models of the different cross-bridge forms using the crystal structures of myosin and actin.  Our first effort shows cross-bridges at all stages of the working stroke as well as cross-bridges in the presumably weak binding states that precede force production.  The work suggests that the position of the myosin motor domain on actin changes during the so-called weak to strong binding transition in addition to the well-known movements of the light chain domain lever arm during the powerstroke itself.

A second area of research emphasis is the structure of the thick containing filaments from striated muscle. We recently published the first 3D imagae of such a filament that revealed the arrangement of the myosin rods in the filament backbone for the first time. We are progressing toward an image with sufficient resolution that a reliable atomic model can be built into the 3D density. When completed this will be the first such structure.

The final area of research that we are involved in is the structure of viruses, both enveloped as well as icosahedral. We published the first structure of the Env spikes of HIV. These spikes are required for virus entry into the cell and are a target of research into the mechanism of antibody neutralization. Because of the health importance of viruses, we will continue to explore ways of elucidating structure information that might inform treatments for virus pathology.

Selected from a total of 130