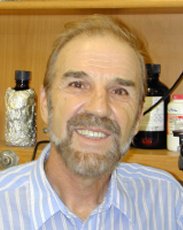 Mammalian cells irradiated in the presence of molecular oxygen are much more sensitive to radiation damage than are cells irradiated at lower levels of oxygen (hypoxic cells) or in the absence of oxygen (anoxic cells). Normal body tissues are usually fully oxygenated and, therefore, highly radiosensitive. Many cancers, however, contain extensive regions of hypoxic cells and are thus radiation resistant. We have recently demonstrated that it is possible to reduce the radioresistance of hypoxic tumors greatly either by hyperthermia (fever) or by administration of artificial oxidizing agents (nitroimidazoles), which mimic the action of oxygen. Much more pronounced radiosensitization is obtained if both hyperthermia and nitroimidazoles are administered, simultaneously. Under these conditions, it is possible to achieve combined sensitization effects that exceed even those of oxygen; i.e., the formerly incurable hypoxic regions of the tumor become more sensitive to radiation than fully oxygenated tissues. Radiosensitization in normal tissues (skin, intestine, bone marrow) is either much reduced or completely absent. It appears, therefore, that combination treatment exerts selective effects on hypoxic cancers and little or no adverse effect on normal host tissues.

Many radionuclides decay by electron capture and subsequent emission of a shower of low-energy Auger electrons. The most extreme example of such an electron-emitting radionuclide is iodine-125. We have demonstrated that iodine-125, incorporated into DNA as the thymidine analogue iododeoxyuridine, causes radiotoxic effects that exceed those of DNA associated beta-emitters by a factor of 15 to 25, even though the ratio of intranuclear energy deposition per decay is only 2.7 to 3.5. Interestingly, iodine-125 and other Auger emitters need to be present in or at the DNA to exert their toxic effects. Auger emitters incorporated into cell compartments other than the cell nucleus are extremely nontoxic. These findings indicate that in mammalian cells radiation energy needs to be deposited in the DNA to cause lethal effects. The result, in terms of practical applications in nuclear medicine, is that Auger emitters that remain localized outside the cell nucleus may be extremely well suited for diagnostic medical applications where it is desired to keep the biologic damage as low as possible. Conversely, before the potential of Auger emitters as radiotherapeutic agents (for example in cancer therapy) can be realized, these radionuclides must be introduced directly into the cell nucleus.