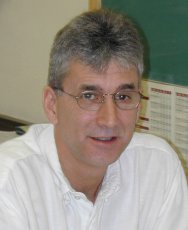 Studies in our lab concentrate on an unusual repetitive DNA, called satellite 2, which was first found in the newt Notophthalmus viridescens. Although the function of this element is not presently known, many of the novel properties of satellite 2 are of general biological interest. Much of our work has focused on the ability of satellite 2 transcripts to catalyze their own site-specific self-cleavage. Using transcripts synthesized in vitro from specialized cloning vectors, we have performed an extensive characterization of the sequences and structural elements in satellite 2 that are required for self-cleavage. Studies such as these have important practical applications in the development of RNA-based laboratory tools and therapeutic reagents, but they also have interesting evolutionary implications. It is believed that the first biological macromolecules were RNA, not DNA or protein, and that catalytic RNA motifs are remnants of a time when life was first evolving. Furthermore, the early catalytic RNA's would naturally provide the material for the subsequent evolution of many of our modern-day macromolecules. Accordingly, segments of the early catalytic RNA's could have been modified and recruited for different functions in newly evolving RNA's, in a manner similar to the shuffling of exons during protein evolution. We therefore believe that detailed biochemical studies of catalytic RNA's such as satellite 2 will provide valuable insights into functional domains and motifs in the more modern RNA's. In fact, a group of small RNA's localized to the nucleolus have a set of conserved sequence domains that show striking similarities to segments of satellite 2 that are important for self-cleavage. We believe that this situation reflects an evolutionary relationship between the nucleolar RNA's and satellite 2. Furthermore, although the functions of the sequence domains in the nucleolar RNA's are not known, we believe their activity in satellite 2 is a reflection of their original derivation from a primordial catalytic RNA.

Detailed investigations of other properties of satellite 2 have added support for this novel concept. For instance, we studied the mechanism of transcription of satellite 2 by injecting cloned satellite 2 DNA into Xenopus laevis oocytes and found that the satellite 2 transcriptional promoter belongs to a class of promoters previously found exclusively in small nuclear RNA (snRNA) genes transcribed by RNA polymerase II, a family of genes that includes the nucleolar RNA's discussed above. In addition, transcripts consisting of little more than the satellite 2 self-cleavage domain get modifications to their 5' cap structure that are also exclusive to the snRNA's. Thus there are distinguishing functional relationships between satellite 2 and snRNA's in addition to the sequence similarities mentioned above.

Our current view of satellite 2 is that it is an aberrant copy of an snRNA gene that has acquired properties that enable it to proliferate in the genome as a selfish DNA element. Self-cleavage, however, is not a recently acquired property; instead it reveals ancient activities of the homologous motifs in the snRNA genes. Our current work involves further studying the transcription and self-cleavage reactions associated with satellite 2 and obtaining further evidence for the evolutionary perspective described above.