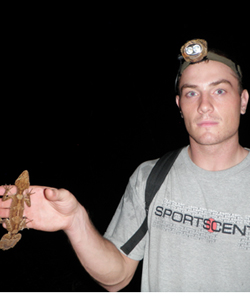 I am a doctoral candidate in Dr. Darin Rokyta’s lab where I focus on the genetics of adaptation in snake venoms.  Many proteins participate in multiple, independent processes and often perform very different functions in specific cells, tissues, and at various developmental stages. As a result, proteins with diverse biological functions are believed to be under strong evolutionary constraint, and mutations within the coding regions of these proteins are predicted to have significant, deleterious effects.  However, the modularity of the snake venom gland precludes deleterious pleiotropic effects from favoring regulatory changes, as toxin gene expression is tissue-specific, allowing an unbiased assessment of the genetic pathways of adaptation.

I have identified several populations of the eastern diamondback rattlesnake (Crotalus adamanteus) with distinct venom phenotypes (Margres et al., In prep).  However, identifying the mechanism of adaptation is contingent on first understanding the functional significance (if any) of this phenotypic variation.  Reciprocal median lethal dosage assays in wild prey provide this functional information, quantifying the toxicities of different venoms in both sympatric and allopatric populations of prey.  These functional characterizations in conjunction with high-throughput sequencing and proteomic techniques will create a genotype-phenotype-fitness map, allowing me to determine whether variation in expression, protein sequence, or both are driving adaptation in a trait not inherently biased towards one mechanism or the other.